Tiny Toon Adventures is an Adventure, Platform, and Single-player video game developed by Konami. Throughout the game, the player plays the job of a protagonist named Buster Bunny, where the primary task is to rescue his companion from the clutch of the antagonist, Montana Max.

The outcome of the game depends on the player’s moves and skills, whether he can find his friend or will never meet him again. The game has three significant characters, such as Dizzy Devil, Furrball, and Plunky Duck, with unique skills and attributes. Plucky is dominant in flying, Dizzy destroys the walls and kills many enemies with his spin mode whereas Furrball can climb vertical surfaces easily.

The game introduces six epic worlds and each world has three levels to complete and lock-free the next one. Each level has a significant assignment to complete, and when the player completes the required task, he can proceed further. The significant features of the game are Six Worlds, Several Challenges, and Three Characters. 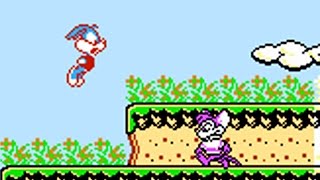 ToonTown Rewritten is a Browser-based Free-to-Play MMORPG video game based on the closed game, Toontown Online by Disney. The game has no link to Disney instead it is developed by a team of Dedicated players from around the world. The game is in Beta Phase currently and it offers playability Online and free of cost. Just like the original game, ToonTown Rewritten is set in a beautiful ToonTown, the house of beautiful and goofy Toon characters. The Toontown is attacked by the nasty Cogs who want to take over by turning all the Toons into Cogs and by converting the Toon buildings into the Cog buildings. The only way to save the Toon Town is to defeat the Cogs without violence. The Toons can defeat the Cogs by cracking jokes on Cogs as Cogs can’t take the jokes. In a hustle to repel the Toon joke Attack, cogs can attack too. Cogs can attack the Toons and damage them by targeting and Signature Cog Attacks. Every Cog Attack depends on two most important things, the Type of the Cog and the Level of expertise of the Cog. Whoever, Toons or Cogs, attacks and damages the Most, wins and earn experience points that help leveling up. Besides fighting and defeating the Cogs, the Toons can complete various toon tasks such as getting and completing a job by the Shopkeeper, and Head Quarter officer. The toon tasks include fighting and defeating the Cogs, picking up and delivering various items, fishing, riding the Trolly, etc. After the completion of the task, Toons can visit the NPCs and get rewarded. With a remarkable and colorful environment, fun tasks, amazing gag fights with cogs and all the other fun activities, ToonTown Rewritten is one amazing replica of the original ToonTown Online video game. Do try it out and enjoy the ultimate ToonTown Online like experience.

Toon Blast is an immersive Puzzle, Match-3, and Single-player video game created and published by Peak Games for iOS and Android. The game offers engaging gameplay with endless fun and takes place in the crazy cartoon world and introduces Bruno Bear, Cooper Cat, Wally Wolf, etc. as playable characters. During the gameplay, you have to match cubes your way through numerous levels and create combos to unlock bonuses and boosters. Your ultimate task is to solve the challenging puzzles to assist the Toon Gang as they traverse around the magical worlds.

You can create your team to compete with others and can rule over the magical world by defeating them. Collect three stars from each level and unlock additional content to become the master. Toon Blast includes prominent features such as Dozens of Obstacles, Collect Stars by Completing Levels, Receive Lives from Teammates, Unlock Boosters, and more. With immersive gameplay, touch controls, and smooth graphics, Toon Blast is the best game to play and enjoy.

Tiny Toon Adventures: Buster’s Hidden Treasure is an Adventure, Platform, 2D, and Single-player video game developed and published by Konami. All through the time, the player takes on the role of an unnamed protagonist who has to defeat Montana Max, the main antagonist who has stolen some precious treasures. Along with reclaiming the stolen artifact, the player must rescue Babs Bunny.

Many foes are waiting, including Roderick Rat and Gene Splicer, who will not feel hesitation to generate troubles. Moreover, the player fill also finds Plucky Duck, Hamton J. Pig, Dizzy Devil, and Calamity Coyote as his main headache. Upon defeating all these huge bosses, the player will unlock Buster’s friends. To complete a level, the player has to find Gogo Dodo, letting him enter a unique portal. Along the journey, the player can grab as many items as possible for the additional helping content.

Toon Math Runner: Math Games is an Adventure, Arcade, Educational, Puzzle, and Single-player video game developed and published by Math Games. Throughout the game, the player takes on the role of a cat (toon child) who has to solve mathematical problems and gain freedom for his friends. The player’s all their friends are kidnapped and taken to Halloween Town, where anything can happen unexpectedly. The player has to make sure that he must save them before midnight; otherwise, they will turn to scarecrows.

As an ultimate math ninja, the player has to eliminate all the enemies coming in front of him and approaches the end level. The gameplay is very immersive, with the provision of an extraordinary set of challenges to boost up the brain. Moreover, the game tests the player’s fastness and thinking capacity in a restricted time. The game is suitable for almost every grade, where each player can play at his own pace.