Hunter X Hunter: Greed Island is an Adventure, RPG, Single-player, and Multiplayer video game developed by Bandai Namco. Throughout the game, the player takes on the role of an unnamed protagonist who has to fight against enemies for Greed Island. The gamer has many playable characters such as Gon, Killua, Kurapika, and others with separate attacking powers.

The player views the environment from an isometric angle that lets the player view every danger. At the top of the screen, the player finds a time clock that is counting the time taken to complete the scenario. Unlike other fighting games, the player has limited health, and as it gets over, the character dies, and the game ends.

Every battle lets the player earn experience points, and higher XPs allows stronger attacks. At the end of every battle, the player receives coins that he can use to unlock or upgrade the characters. Hunter X Hunter: Greed Island has core features such as Multiple Characters, Different Abilities, Isometric Angle, Experience Points, Upgrades, and Fighting Scenarios. 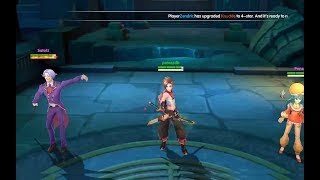 Journey of Greed is a Card, Strategy, and Single-player video game developed by Dird Games. The game enables the player to begin his journey with adventurers from all over the world, to find out countless treasures in the lost island. In the game, the only one person with the most active mind and courage can take all adventurers out alive from troubles. So, the player needs to outsmart his companions and struggle to become the wealthiest adventure. Unlike other traditional card game, it offers a perfect blend of an intense strategy Trading Card and Board game. In the game, the player can play with three opponents on a lost island and in turn will reveal a random event, and it could be an attacking monster, treasure, and a disaster that the player can take advantage of them using cards available in his deck. The player wins by gathering more coins than other players from all over the world at the end of the game. There are four playable characters, and each player possesses unique abilities that the player can use to advance through the game. Journey of Greed includes core features such as Fast-faced Gameplay, Different Ways to Win, Two Types of Decks to Modify, and more.

Path of Sin: Greed is a Puzzle, Hidden Object, Point-and-Click, and Single-player Adventure video game takes place in the 2D world developed by Cordelia Games and published by Artifex Mundi. The story revolves around a rookie inspector who is on her first assignment with her unexperienced co-partner reach at the scene on an island. The island is located in the middle of ocean owned by a young millionaire, who wants to solve matters as quietly as possible. There are over thirty-nine mysterious locations available to explore, and the player can challenge himself with thirty-six riddles. Over twenty-eight collectibles are featured in the game to gather which will increase the power of the player. The player needs to polish the skills, set out on an epic journey full of challenges and attempt to solve each level by revealing the mysteries. In each level, the player has to find the hidden objects and include in the inventory to use later when need. Path of Sin: Greed offers key features such as Sixteen Achievements, 28 Collectibles, 39 Mysteries, and more.

Code Vein is a 2018 Action Role-playing and Single-player video game published by Bandai Namco Entertainment and developed by Bandai Namco Studios. It takes place the post-apocalyptic world with vampire-themed, including other supernatural abilities and the gifts from the consumption of blood. It offers an open-world dystopian environment and puts the player in the role of the protagonist who can explore the land from a third-person perspective. It comes with exciting gameplay inspired by the series of Dark Souls, also released by Bandai Namco. The plot is set not to distance future, where a strange disaster has brought the massive collapse of the globe. In the midst of the destruction lies a secret society of Revenants known as Vien. The last stronghold comprises survivals who must battle for their world and lives. The game puts the player in the protagonist’s role, who must team up and set out himself on an epic journey to the hell’s end to unlock his past and escape his nightmare. With addictive gameplay, superb mechanics, and wonderful graphics, Code Vein is the best game to play and enjoy.

Greed Corp developed by W!Games and published by Valcon Games, is a Turn-based Strategy, Single-player and Multiplayer video game for Multiple Platforms. The game involves the strategic battles on the detailed map introducing the land collapsing mechanic. There are four different factions available such as Cartel, Freemen, Empire, and Pirates and the player is capable of selecting one of them to partake in matches of around twenty minutes. The game offers the Single-player Campaign for each faction and rewards the player with credits at the beginning of his turn and through harvesting layers of land. The player can spend his credits on armouries, troops, transporters, cannons, and more. Each faction in the game has its unique attributes and a set of challenges that the player has to complete at any cost while playing the game to advance the story. Built harvesters in the game will destroy the tile they are standing on and in the specific land around them. In the game, when the player harvest too much, the area begins to crumble. 4-player battles, Thirty-six Unlockable Maps, Customization, Achievements, Collapsing Mechanic, etc. are prominent of the game.

Summoner’s Greed is an Action-Adventure, Strategy, Tower Defense, and Single-player video game developed by PIXIO. During the course, the player, playing as one of the most powerful summoners, has stolen the priceless royal treasure and escaped back to his lair. The fort’s endless army will be chasing the summoner with the objective of bringing the treasure back. The player must be ready for his defense and don’t let anyone grab the precious treasure.

The player needs to strategically place his towers and launch powerful spells to defeat waves of the Realm’s conquerors. A variety of villains like the peasant, the ax-wielding lumberjack, the ice mage, and Elite Knights will come across the greatest summoner, and he must not show mercy to them. The player must earn magical orbs and use them to power up the on-screen character. Rare, epic, and legendary monsters will be at the player’s front doorstep, and he must take the edge of them.

Summoner’s Greed: Endless Idle TD Heroes is an Adventure, Strategy, and Single-player video game developed by PIXIO for Android and iOS. Throughout the gameplay, the player serves as a majestic hero who has stolen the king’s precious treasure. The king wants his treasure back at any cost, and he has ordered his brave army to catch the player.

The player will strategically place his towers to defend against endless waves of the Kingdom’s mightiest heroes rushing towards the treasure. The player can earn magical orbs after defeating the enemies one after another. The game offers the player to recruit the Slimey and Grimey, the super rare Mocha, or the EPIC teddy bear with superhuman strength in the army.

The player can use fireballs, lightning, ice, and much more to power up the monsters, rebuild defenses or take down the King’s army. The significant features of the game are Monsters, Powerful Spells, Endless Enemies, and Real-time Strategy.

Monster Hunter 4 Ultimate is an Action, Role-playing, Single and Multiplayer video game developed and published by Capcom. It is the second entry in the series of Monster Hunter and introduces enhanced environment, combat system and more. The game takes place in the fictional world and lets the player assume the role of the new hunter and dive into the world where he has to complete a series of quests, explore dungeons and fight against its inhabitants. The game unlocks items, power-ups, and objectives, as the player gain experience and can use them to take down foes and earn expansive rewards. According to the story, the protagonist who is a fledgling hunter becomes a part of Guild of the hunter as he explores the town of Val Haber via Sandship. The sandship wrecked after a strong attack by Dah’ren Mohran who is an elder dragon. Hunter safely reaches in a town with his team. In the game world, the player must explore the environment, fight against Dragons and their supporters to earn experience points and save the people and his land. With the well-written story, brilliant mechanics, addictive gameplay and superb visuals, Monster Hunter 4 Ultimate is the best game to play and enjoy.