Harley-Davidson: Race Across America is an Adventure, Racing, Single-player, and Multiplayer video game developed by Wizard Works Software. Throughout the game, the players take part in a series of races using the most famous Harley-Davidson bikes across realistic locations around the world. The game offers two single-player modes, such as Practice Race and Tour Game.

In a practice race, the player needs to select a single course and a bike to race on, whereas Tour Game is the main mode in which players participate in a tour leading in South Dakota. A number of pre-determined routes are there to free the arms in Tour Game, where most of them take place in American locales.

The game also holds many motorcycles from other companies like Twin Cam 88, 1956 KHK, etc. Each motorcycle is different from the other on behalf of its handling, performance, and fuel economy. 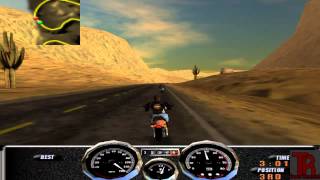 Harley-Davidson: The Road to Sturgis

Harley-Davidson: The Road to Sturgis is an Adventure, Racing, Single-player, and Multiplayer video game developed by Mindscape. The game has let the player ride the most famous Harley-Davidson bikes with the mission to go through the open countryside and approach the destination in time. During this ultimate driving adventure, the player is required to upgrade his motorcycle regularly.

Moreover, the player must take part in extreme cycling events taking place in local towns. While controlling the racer, the player views the environment from the third-person perspective. Along the way, the player finds ladies, and the player can pick them to enjoy the ride. Meanwhile, there are other vehicles roaming on the road, and the player must avoid hitting them in order to keep going. Harley-Davidson: The Road to Sturgis has core features such as Driving Simulation Gameplay, Third-person, Harley-Davidson Bikes, and Other Roaming Vehicles.

Harley-Davidson Motorcycles: Race to the Rally

Harley-Davidson Motorcycles: Race to the Rally is an Adventure, Racing, Single-player, and Multiplayer video game developed by Fun Labs. All through the game, the player gets behind the steering wheel of the fastest bikes ever and has to show off his ultimate racing skills to beat the rivals wishing to become a champion.

The game puts the player on long highways across America with rare road challenges. The game has 20 authentic Harley-Davidson motorcycles, including the Dyna, Softail, Touring, and Sportster. The bike customization feature lets the player modify his vehicle using in-game licensed parts and accessories. With such ability, the game has offered the player to experience varied bikes with endless possibilities.

Harley-Davidson & L.A. Riders is an Adventure, Racing, Single-player, and Multiplayer video game developed by Sega. All through the game, the player gets a chance to ride Harley-Davidson bikes with the mission to complete a series of checkpoints around Los Angles. The player has a limited time and remaining within the time he has to pass out the checkpoints.

The number of stages depends on the player’s settings, and by default, it can be three, four, or five stages per match. The player also has to collect hidden items refereed as tokens to earn bonus points. The highly paid tokens are located in more obscure and irrelevant areas of Los Angeles.

Harley-Davidson: Race Around the World

Harley-Davidson: Race Around the World is an Adventure, Racing, Single-player, and Multiplayer video game developed by Infogrames. All through the game, the player clears his hand over competitive races where the racers from all over the globe are waiting for a twist. The game features several exotic racing environments that may include Australia, Japan, France, Germany, and Hawaii.

Time trial mode is the mode against time where the player has to prove that Harley-Davidson bikes keep more speed than time. Over progression, the player has to unlock boosts that prove to be helpful in attaining the extra power needed to turn the bike into a rocket. Onscreen map features indicate the player about his current location and show how far the destination is. Along with bike customization, the player can customize his rider using many limitless possibilities. Moreover, the player can race at nights where the front lights will enlighten the dark tracks.

Harley Davidson Motor Cycles Road Trip is an Adventure, Racing, Single-player, and Multiplayer video game developed by Fun Labs. Throughout the game, the player gets in the role of a motorcyclist who has to gain hand over speed and skills by engaging in long races across American highways. The game has five playable modes where each mode has a distinct objective to complete.

Moreover, the player can customize his bikes using over 70 official Harley parts and different paint schemes. Modification of the bike is endless as the player has a wide range of ideas to implement in order to make a unique model. Along with random race, the game also features over 15 assignments as a side challenge letting the player improve his racing abilities.

Harley’s Humongous Adventure is an Action, Side-scroll, and Single-player video game developed by Visual Concepts and published by Hi-Tech Expressions. It takes place in the 2D world, and the player assumes the role of Harley, who is a man in a green suit. According to the plot, the protagonist has shrunk himself to the size of a soap. The ultimate mission of the player is to collect parts of his machine in order to return him to his former size. The player progresses through levels while gathering items, including rubber bands, tacks, marbles, and more. There are several types of enemies available, including ants, bees, and flies. While playing the game, the player needs to dodge the diseases that the flies vomit. The player is armed with a jet which he uses to jump longer. Besides, he can move in both right and left directions. With good gameplay, 2D graphics, and cool sound effects, Harley’s Humongous Adventure is a superb game to play.