Dan the Man: Action Platformer is an Arcade, Platform, and Single-player video game developed by Halfbrick Studios. Throughout the game, the player takes on the role of a protagonist named Dan, whose main mission is to confront different enemies. Soldiers, Robots, Bats, and Powerful Bosses are waiting, and the player must clean up the streets to take all the coins.

The game has three playable modes, including Survival, Campaign, and Adventure. In the campaign mode, the player follows the protagonist’s storyline through a series of thrilling missions. Survival mode lets the player reach the top rank and show his skills by surviving against hordes of enemies as long as possible.

Adventure mode will test the player’s fighting skills by offering tons of epic challenges letting the battler unlock skins and prizes. The player can upgrade his character to ensure his all-around performance, unlock new abilities, and cast epic combos for the enemy’s hard time. 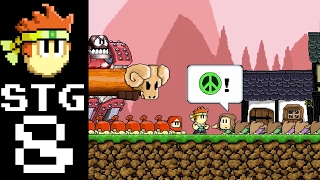 Dan the Man focuses on Beat ‘em up, and Action elements and revolves around the character and his efforts to save his village and his girlfriend name Josie. The game is developed by Halfbrick Studio who created the Ninja Fruits and Jetpack Joyride. It features the character like Mario and embarks you on an epic adventure. In the story, your village is threatened by an organization called the Shadows. There are twelve different stages filled with action, hordes of enemies, and epic boss stage. Use your kick and punch throughout the level and defeat your enemies. Gather power-ups to enhance your abilities and save your world. The game includes two different modes to play and enjoy such as Survival Mode and Battle Mode. Unlock further content, upgrades, costumes, and character using your points and progress in the game. Dan the Man offers prominent features such as Robo Monsters, Powerful Weapons, Test your Skills, Pinpoint Controls, Story Mode, Create own Character, and more. With Retro graphics, Boss Fight, Combo Moves, and exciting story, Dan the Man is the wonderful game to amuse.

Sam & Dan: Floaty Flatmates is an Action, Adventure, Indie, Strategy, Co-op, Free-to-Play, Virtual Reality, and Single-Player game developed and published by Pelican Party Studios. In this game, you have to play two characters trapped inside the house because of the massive flood. Working cooperatively to acquire resources to establish the link to a ship, your partner is stuck in a nearby apartment over the road. Acquire equipment that lets you communicate more easily, including a plastic container that will be utilized like a telephone.

Furthermore, avoid getting into the water even though there is a large monster nearby. This is the event’s dominant focus. You begin throughout the depths of horrific destruction. You start from nowhere and must seek out equipment as well as weapon systems in establishing the bridges to meet a young horror companion. Sam & Dan: Floaty Flatmates has fundamental features such as Realistic Visuals, Several Weapons or Tools, Easter Egg Hunting, Terrible Enemies, Customization, Free to Play, Simple Controls, and Multiple Gaming Modes.