Cabela’s Dangerous Hunts is a Hunting, Shooting, Adventure, and Single-player video game developed by Fun Labs. All through the game, the player goes on hunting journeys equipped with a 4×4 jeep and a weapon in hand to take down the dangerous animals. The game features several game modes, including Career Mode, Free Roam, etc.

In the career mode, the player has to create a profile and customize the character’s stats, age, and appearance. The interesting thing about the game is that the player will get penalties for killing non-game animals. If the player shoots three non-game animals, it will result in failing the hunting tour.

Aggressive animals such as lion, bear, leopard, etc., can defend themselves by attacking the player, so the player must be on toes. There are twelve exotic locations that feature twenty-six animals to hunt out of, which mostly are wild and can tear their hunter into pieces in no time. 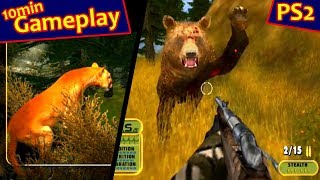 Cabela’s Dangerous Hunts 2 is an Adventure, Shooting, Hunting, and Single-player video game developed by Sand Grain Studios. As a sequel to the Cabela’s Dangerous Hunts game, it lets the player play the role of a famous hunter assigned to travel through many different types of topographies in order to slay down the giant animals.

Unlike the previous games, the hunter has a limited amount of energy, and if he gets injured, his health meter gets low, which results in the death of the character. There are many weapons, including handguns, rifles, shotguns, knives, and machetes, to trap the animals and hunt them in real-time. The game takes the player to Alaska, where dangerous animals will never leave him alone.

Before the animals come in a position to attack, the player musts shoot him in order to survive. Cabela’s Dangerous Hunts 2 has core features such as Survival Quest, Hunting Scenarios, and Deadly Weapons.

Cabela’s Dangerous Hunts: Ultimate Challenge is an Adventure, Hunting, Simulation, and Single-player video game developed by Sand Grain Studios. The game puts the player in a hunter’s role where the mission is to lay down the animals that are not easy. The player views the environment from the first-person perspective while hunting the animals, and it’s quite convenient for any hunter.

The player can go on foot or use hunting vehicles to travel through expanded locations. The game has borrowed every animal from the first release and has added two new animals, including Burchell’s Zebra and African Dog. The player must be careful about shooting as one mistake can deal with a character’s death.

An arsenal of weapons is there, letting the player track down multiple animals that are wild throughout their childhood. Cabela’s Dangerous Hunts: Ultimate Challenge has core features such as New Animals, Exploration, Hunting Scenarios, and Many Weapons.

Cabela’s Dangerous Hunts 2009 is an Adventure, Shooting, Hunting, and Single-player video game developed by Sand Grain Studios. During the game, the player has to play like an animal hunter where the mission is simple but dangerous. It is not easy to lay down large or wild animals, but the player has to keeps this thing in mind and must offer death to the animals.

While playing the game, the player views the environment from the first-person perspective. The zooming feature allows the player to see far distance targets easily and shoot him from a distance before he gets active. Handguns, rifles, shotguns, knives, snipers, and other weapons have made things easy, but courage is most dominant.

A limited health meter must be maintained to keep hunting as long as possible. Cabela’s Dangerous Hunts 2009 has core features such as Multiple Scenarios, Deadly Weapons, FPS, Many Terrains, and Zooming Ability.

Cabela’s Big Game Hunter Pro Hunts is a Single-player, First-person Shooter, and Sports video game developed by Cauldron and published by Activision. The game offers the open-ended environment based on the forest-themed and puts the player in charge of the protagonist, a hunter, and his ultimate task is to explore the beautiful landscape from a first-person perspective. It brings the four experts (Jim Shockey, Middleton, Vicki Cianciarulo, and Ralph) from the competitive world and takes the player on the Single-player campaign focused on North America. The main job of the player is to manipulate the world and complete a variety of objectives as hunting wild animals using different weapons including shotgun, bow, and rifles to progress through the game. During the gameplay, the player can get access to four new hunting areas divided into the Southwest, the Southeast, Northeast, and Northwest. There are different animals in each area which can be hunted. With exciting gameplay, superb mechanics, and smooth controls, Cabela’s Big Game Hunter Pro Hunts is the wonderful game to play.

Cabela’s Dangerous Hunts 2013 is an Adventure, Hunting, Simulation, and Single-player video game developed by Activision. All through the game, the player plays his role as a hunter named Jacob sets out on a hunting trip in Alaska and is attacked by an aggressive scar-faced bear. It is a combination of first-person shooter and rails gun shooting genres.

The player needs to navigate through many environments and must defend himself from waves of hostile animals. The game has offered the player a shotgun, a rifle, and a crossbow to let the prey get down. Targeting can be done easily using a snap-to targeting system that allows an automatic lock on the player’s nearest enemy.

The game has three different game modes to experience such as Story, Maneater, and Shooting Gallery. Story mode is of vital importance to the other two modes. Maneater is an arcade-style combat mode where the player needs to fight against multiple waves of hostile animals alone.

Cabela’s Dangerous Hunts 2011 is an Adventure, Shooting, Hunting, and Single-player video game developed by Activision. Throughout the game, the player has to adopt Cole Rainsford’s role, the hunter, who goes on an African Safari Adventure along with his father. The player’s mission is to hunt dangerous animals that are terrorizing locals.

The player can roam on the expanded maps filled with dangerous traps. A crew of black wolves with glowing red eyes can burst out and attack the player. Cole and Adrian are the two playable characters where both them are brave but keeps aggressive attributes. Whether it is an icy mountain or barrel dessert, the player is always in danger and must be active enough to face sudden attacks.

Moreover, it is not mandatory that the player has to hunt using weapons sometimes; due to animal attacks, the player remains empty-handed and needs to survive by hand-to-hand combat against animals.

Cabela’s Big Game Hunter 2010 is an Adventure, First-person Shooter and Single-player Hunting video game developed by Cauldron and published by Activision. The game casts the player in charge of the protagonist named as Jack, who is struggling to become a member of hunting club known as Order of Orion. The player starts his adventure in Colorado, where he takes down mule deer, pronghorn, whitetail deer, and more. After that, the player tracks and hunts a lion to score the best points. There are a series of levels and the player needs to accomplish each one to score the best points. The player explores the environment from a first-person perspective and use a sniper rifle to kill wild animals. In each level, the player has to complete multiple objectives to gain experience and unlock further levels to become the master. Cabela’s Big Game Hunter 2010 includes prominent features such as FPS Action, Exploration, Wild-themed Environment, and more. Try it out, if you want to become a hunter.