Retro Classix: Joe & Mac – Caveman Ninja is an Arcade, Beat-em-up, Single-player, and Multiplayer video game developed by Data East. Throughout the game, the player takes on the role of an unnamed character who has to find his captured girlfriend. The antagonist named Neanderthals has hijacked the lady, and now it’s the player’s turn to rescue the female from the antagonist’s clutches.

Joe and Mac are two playable characters with different attributes. In solo mode, the player can play alone, but in two-player mode, the player can invite his friend to play together. The player can unleash special attacks to defeat the powerful bosses and advance through the story. Unlike other similar games, the player views his health points at the top. Retro Classix: Joe & Mac – Caveman Ninja has core features such as Two Playable Characters, Limited Health Points, and Scoring System. 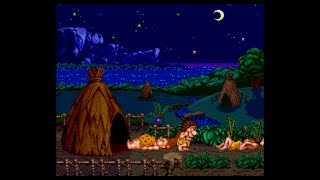 Joe and Mac: Caveman Ninja is an Action, Platform, Single and Multiplayer video game developed and published by Data East. The game takes place in the prehistoric worlds and introduces a variety of levels. The player can assume the role of one of two protagonists such as blue-haired Mac and green-haired Joe. The objective is to navigate each level while fighting against numerous monsters using different weapons such as fire, electricity, flints, bones, and more. According to the story, a rival tribe of cave dwellers kidnaps a group of women and the player’s responsibility to save the women from the tribe. The game introduces health system, by which the player can lose his health over a period. The player can play alone or can play with a friend in Co-op mode. As the game proceed, it becomes challenging and other levels will be unlocked. With prominent features, addictive gameplay, and brilliant story, Joe and Mac: Caveman Ninja is the best game to play and enjoy.

Retro Classix: Bad Dudes is an Arcade, Beat-em-up, Single-player, and Multiplayer video game developed by Data East. The story follows an unnamed dude who has to rescue the kidnapped president Ronnie by encountering the ninjas. The player has to make his way through many stages in which ninjas will attack him and keep him in extreme trouble.

At the screen’s top, the player can see his time and remaining health. Moreover, the bottom line of the screen lets the player view his enemies and remaining lives. Elimination of health bar will cause decrement of life and termination of all lives will result in game’s end. The game has a series of levels allowing the player to play with increasing challenges.

Retro Classix: Bad Dudes with fundamental features such as Side-Scrolling, Many Levels, Retro-Styled Gameplay, Limited Lives, Multiple Enemies, and Ninja Attacks is the best game of previous scenarios to play in an advanced era.

Joe & Mac 2: Lost in the Tropics is an Adventure, Platform, and Single-player video game developed by Data East. All through the game, the player gets control over a character who has to regain the stolen crown of the king of the village.

The game has two caveman ninja heroes that are Joe and Mac and each one has different abilities. Each player has limited lives and as the player loses all the lives, the game gets over. The game offers the players to begin a friendship with a sweetheart girl in the town and offer her roses and meat as presents.

When the player gets married, he gets the chance to be a father of a youngster. The player can replay levels to get stone wheels that serve as the game’s virtual currency. The map editor offers the player to edit the level with the desired obstacles to earn enough currency.

Retro Classix: Express Raider is an Arcade, Beat-em-up, Single-player, and Multiplayer video game developed by Data East. Throughout the game, the player has to prove his reflexes by beating all the enemies along the way. The player equips a gun to shoot the enemies or can deal with hand combat to lay down the foes.

The game has a series of levels where the player has to complete all the levels after terminating the on-screen foes. The game has allocated a specific time for each level’s completion, and the player has to beat the time to unlock the advanced levels. The level will become incomplete if the time runs out or the character’s wellbeing meter gets depleted.

Elimination of enemies will give the player scoring points, and killing more enemies will promise extra rewards. Major features of the game include Score Points, Many Levels, Hand-to-Hand Combat, and Side-Scrolling Angle.

Retro Classix: Two Crude is an Arcade, Beat-em-up, Single-player, and Multiplayer video game developed by Data East. It sets in 2020 where the NY City is served by nuclear explosions, and the player has been recruited by the special government agency to unravel the plague of hazardous mutants to regain control of the city.

Progression has discovered that a scientist has created a special fluid made up of unwary victims that has the ability to turn humans into fighting machines. In solo mode, the player can play alone, but two-player mode lets two fighters fight together.

At the screen’s top, the player finds his health meter that gets depleted if the player comes in contact with any enemy. Moreover, the player can score points by encountering enemies, and killing many enemies means the highest points. As the player kills enemies, he finds the red bar, at the bottom, depleted.