Mystery of Haunted Hollow 2 is an Adventure, Horror, and Single-player video game developed by Midnight Adventurers LLC for Android

The player has to solve new and intriguing puzzles on this quest and discover the final truth along with true destiny. The player will come to face new ghosts and souls from which some are friendly, but most of them have sinister plans about the player.

The game offers haunted places for exploration, such as the horror shack, an old barn, a secret library, and many more. A thrilling dark asylum, an abandoned Hotel, and the Old Manor will give a realistic haunted platform to the player. Be careful, trust nobody in this town and save the character’s life. 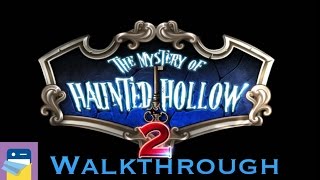 Mystery of Haunted Hollow: Escape Games Demo is an Adventure, Puzzle, and Single-player Hidden Object video game developed and published by Midnight Adventures LLC for Mobile Devices. The game takes the player in an abandoned mansion, situated in a haunted town. The player takes on the role of the protagonist, a detective who embarks on an epic adventure and explore the dark secrets of the city to solve the thrilling puzzles. In the game, the player is only equipped with a suitcase and faint memories. The player is determined to find out the details of the life to advance through the game. There are many levels, and each level has a set of objectives that requires the completion of different tasks to become the master. As the game advances, the player finds a set of tools and can add them at his disposal to use later when need. The game is designed with the player in mind and offers easy to explore the world with puzzles. Mystery of Haunted Hollow: Escape Games Demo offers prominent features, detailed graphics, and more.

The town has welcomed the player to integrate puzzles and complex scenes where the destiny must need to be uncovered by the player. The game has multiple endings where the player can experience all the outcomes by playing the adventure repeatedly. The stories are a horror that requires the player to hold the nerves and unravel the dark brainteasers.

It is not as easy as it seems, but the player has to use hints sometimes to advance the story. Accept the challenges, solve the puzzles, don’t get frustrated, and reveal the mysteries. The sequel has offered core features that are Multiple Puzzles, Hint System, Several Outcomes, and Intuitive Gameplay.

Midnight Club: Street Racing is an Action, Racing, Single and Multiplayer video game created by Angel Studios and published by Rockstar Games. The game revolves around competitive street racing based on the movie The Fast and the Furious. It is the first title in the series of Midnight Club and followed by Midnight Club 2. According to the story, a mysterious group of urban street racers rule on the New York City called the Midnight Club. You assumes the role of the protagonist, a cab driver and your primary objective is to learn about the secret club and struggle to join it. You starts your career with slow and unmodified vehicles, that being a taxi. There are a series of races available and each race offers a variety of goals, in which you must effort to defeat the rival racers and win faster and expensive cars. Midnight Club: Street Racing offers prominent features such as a variety of Cars, Customization, Third-person Exploration, Street Races, and more. Try it out, and you’ll love it.

Haunted Manor 2: The Horror behind the Mystery Free

The player was driving a car, and suddenly a woman appeared to be white, came in front of the car. It was midnight, and the player lost control of the vehicle that results in a collision with a tree. The player found himself under the shadow of the dark tree, and the weather became rainy. The player has to explore the mysterious jungle from a first-person perspective and finds a shelter to avoid the storm.

The game offers 100 rooms with different locations, and a piece of horror music makes it quite realistic. The player needs to solve several puzzles to make progress through the game in this horror climate. The game has core features, such as First-person Perspective, Puzzles, 100 Rooms, Horror Climate, and Exploration.

Grimm’s Hollow is an Action, RPG, Pixel Graphics, Single-player, and Multiplayer video game developed and published by ghosthunter. All through the time, the player takes on the role of Lavender, the main protagonist who has awakened in a place surrounded by over-excited as well as skull-masked strangers. The creatures are equipped with cake and balloons, but the character seems afraid as it wasn’t her birthday.

Now, the player has to devise a plan to find her brother and escape from this Hollow, but the situation is so critical. The game has many different ghosts and food, but the player must avoid the ghosts and collect the food in order to stay alive. Interestingly, the game has three different caves with a different number of enemies, so it all lies in the player’s hand to come to a good ending or traps the character on the pity of the hollow creatures.