Mighty Bomb Jack is a 2D, Platform, Side-View, and Single-player video game developed by Tecmo. All through the time, the player assumes the role of Jack, the main hero, who must traverse through over fifteen levels set within a pyramid with the goal to take down the main demon/antagonist. Belzebut has attacked the royal family, and now the player has to take this seriously and rescue the royal Pamera family. Along with the levels, the player finds mighty coins allowing Jack to change colors.

Blue-colored Jack can open orange treasure chests, orange Jack can open any treasure chest, whereas upon transforming Jack to green color, all the enemies will be converted to gold coins for five seconds. Upon collecting more than nine mighty coins, the player will be teleported to a Torture Room. Similar to Mighty Coins, the player also finds Mighty Drinks that will add ten additional seconds to the overall timer. 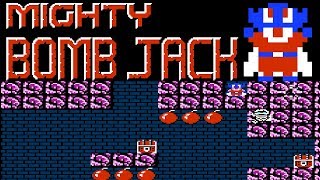 Bomb Jack II is a 2D, Platform, Side-View, and Single-player video game developed by Tecmo. It is the sequel to the Bomb Jack where the player is once again pushed to play the role of Jack, the main protagonist, who is on a quest to find many red-colored coins from plenty of ledges. The game’s antagonists are birds and mummies as they drop items like flying saucers and orbs to cause difficulty for Jack. If the player comes in contact with these items, he loses a life.

If the player has collected bombs, it will cause an increment to the bonus meter at the top of the screen. When the meter is completely filled up, the player finds all the enemies turned into gold coins for a short time. Some other bonuses will also appear and increase the overall multiplier up to 5x, grants an extra life, or award a free game.

Bomb Jack is a Platform, Single-player and Two-player video game developed and published by Tehkan. The game mainly revolves around Arcade elements and offers exciting gameplay uses the old school graphics. In the game, Bomb Jack serves as the hero who needs to perform high jumps to float in the air as long as possible. The main goal of the player is to gather all the red bombs available in the stage to score the best points. The antagonists of the game are foes like mummies and birds, who struggle to fend off the player by completing his tasks. There are several levels, and each level offers a unique objective that the player has to complete at any cost while manipulating the level. The bonus meter of the player continuously increases, as the player collect bombs. When the health meter is filled up, a bouncing circle appears to contain P letter, and when gathered, it will turn all foes into bonus coins for a short time which the player may gather them. With exciting gameplay, superb mechanics, and cool controls, Bomb Jack is the best game to play.

Spider Jack is a fantastic Physics-based Puzzle video game that features Jack the Spider as the main game character. Jack the Spider hangs upside down and the player helps him collect the Flies by cutting his thread like web. With every fly eaten, Jack gets bigger. On the way to fly, collecting all the stars is necessary. With every star collected player gets some extra points and advances to next level. Spider Jack is an awesome product of Chillingo and is available to play on iOS and Android. Game features 75 addictive new levels, multiple solutions to the complex puzzles, amazingly realistic game physics, beautiful visuals and easy controls along with cool hand drawn artwork and amazingly catchy gameplay. For all the Cut the Rope series fans, Spider Jack is not less than a treat, so do try it out.

This Rebooted version of the popular game Dead to Rights is packed with fantastic Action-Adventure, RPG and Third-person Shooting elements. Dead to Rights: Retribution kicks off with the protagonist Jack fighting with the Grant City Triad members. He gets beaten up badly and was nearly killed by the triad when suddenly Jack’s Canine friend Shadow appears at the scene. Shadow kills all the four members of Triad and Jack fades off. Story continues Jack gets healed and leaves to complete the main objective of the game, killing the antagonist Riggs. Riggs hears about Jack and flees to another of his safe houses but Jack catches him and after a long run of thrilling and hardcore battle with Riggs and all of his accomplices, kills him and the game concludes. Dead to Rights: Retribution provides with an awesome combination of Shooting, Survival, and RPG elements along with a great storyline, super crystal clear 3D graphics and a huge amount of other great features. Do try it out, you’ll definitely like it.

Tecmo Bowl Throwback is a Football, Single-player and Multiplayer video game, created by Southend Interactive and published by Tecmo. The game serves as the remake of the Tecmo Super Bowl, with the fast-paced gameplay and the same rules as the original game has, but with a choice to play it in new HD 3D graphics. During the gameplay, the player can switch it back to old-school in real-time with the similar music and graphics from the original game. The game is played from a top-down perspective, represented in an arcade-style, in which the player must compete against teams from across the world to become the international champion with animated cutscenes. It comes with updated graphics and user interface. There are several characters, teams and stadiums available from which the player needs to select his favorite to start the game to start his struggle to become the champion. Tecmo Bowl Throwback includes core features such as Online Play, Team Name Editor, Season Play, Switch between 2D to 3D Graphics, and more. Try it out, and it will entertain players who love playing Football games.

Incredible Jack: Jumping and Running is an Arcade, Side-scroll, and Single-player Platform video game released by BelMacInteractive Company for Mobile Devices. The game introduces an epic journey and lets the player blow up everything around him and prevail against seven massive bosses to advance. During the gameplay, you need to improve your hero by making his stable while having fun with cute graphics and addictive gameplay. The game lets the player control the protagonist named Jack, who needs to run and jump his way through a set of levels while gathering collectibles to increase the score. The game increases the difficulty as reaches to advance stages. In the game, you have to help Jack save his family from epic demons of the underworld environment. While navigating the world from a side-scroll perspective, you must gather tons of coins and struggle to wipe out enemies to become the master. Incredible Jack: Jumping and Running offers prominent features such as Seven Amazing Worlds to Explore, Forty-three Action-Packed Levels, Retro-style Platformer Gameplay, and more.

Amazing Breaker is an Arcade and Single-player video game for mobile devices such as Android and iOS developed and published by Black Maple Games. The game offers the simple gameplay, in which the player must take aim, and release the blaster to destroy the structure to score the points. It has engaging gameplay and the game comes with lots of fun-filled levels to explore. It has more than eighty challenging stages available with eighty ice figures to be smashed. The game rewards the player with stars which can be used to unlock additional stages. During the gameplay, the player can use multiple bombs such as Spike bomb, Ghost bomb, Helicopter bomb, and Split bomb each with its unique attributes. The spike bomb can be used to aim and shot to destroy the structure. The Ghost bomb can go through ice, rub the playfield to control. The player uses the Helicopter bomb to deploy the violet crystals. Amazing Breaker includes core features such as 120 Levels, Multiple Bombs to use, Earn Stars, Easy to Control, and more. Try it out, and you’ll love it.

Bioshock, developed by 2K Boston in collaboration with 2K Australia and published by 2K Games is a First Person Shooter and an RPG (Role Playing Game) video game playable on PC (Microsoft Windows), Mac OS X, PlayStation 03, Xbox 360 Cloud OnLive and iOS platforms. The game is set in the year 1969 and features the protagonist Jack who after a plane crash near an underwater city Rapture, tries to escape but instead discovers something out of this world. The city stood in the bottom of the sea for decades but its foundations started to crumble with the discovery of a Plasmid named ADAM intended to empower humans with super powers. Jack tries to escape the city but the only possible way to get out of the city gets stormed with the ADAM powered super humans and jack starts fighting with them in order to get out. By the use of different weapons and the Plasmid, Jack fends off the enemy and frees a bunch of the last remaining sane people who then turn the city’s defensive systems against the enemies. Jack continues his journey, keeps defeating the foes and finally gets out of the city by utilizing the stealth and melee techniques along with the use of different weapons. BioShock with a horror survival and biopunk (a mixture of Biotechnology and Punk) themed environment, a brilliant story-line and quite exciting game-play provides with an amazing FPS gaming experience. Do try it out.

Need For Speed: The Run

Need for Speed: The Run, created by EA Black Box and Fireband Games is an action packed Car Racing video game. The story of the game revolves around the character of Jack Rourke Aka the protagonist who gets abducted by the mob for not paying back the loan he took. Finally after getting the word, the mob sets him free to take part in an upcoming race tournament, earn money and pay back the loan. Jack calls up his girlfriend and a longtime friend Jack Harper, tells them about taking part in the racing event and asks for some money and a car. After getting the money and car, jack pays the event entrance fee ($250,000) and starts up his career. This is where you get into the play as Jack Rourke and you get tasked with winning the races and saving the money to pay the loan. Need for Speed: The Run provides with cool racing cars from licensed manufacturers, great racing tracks based up on real life locations (Altamont Pass, Death Valley, los Angeles, Chicago, New York Etc.) and environments, great visual details, a well written story-line, fast action and thrill filled game-play and an open world.

Don’t Push The Wrong Button is a Casual, Adventure, and Single-player video game developed and published by Rene Wahl for mobile platforms. During this bomb disarm simulation, the player has to solve different riddles within the given time and deactivate the bomb to achieve success. Most interestingly, the game contains over 60 levels with a lot of different modules and bomb types, and as the player moves on, the increment in the difficulty is permanent.

Each bomb type has different wires, and cutting the correct wire can stop the bomb only, so if the player cuts a wrong one, the bomb will get exploded. It is an addictive game with nothing to do except push a button, but the right one is all above. The timer will be ticking, and when it approaches zero, the screen will get black in no time.