Kingdom Builders is a Simulation, Base Building, and Single-player video game developed by ebb & flow Games

Kingdom Builders is a Simulation, Base Building, and Single-player video game developed by ebb & flow Games. It is a mixture of RPG and construction genres letting the player help the villagers in chopping down a tree and attack the enemy at the same time. The player can build houses, farms, and many other buildings to create a kingdom. Furthermore, the protagonist can encounter different enemies along with the explorations.

For every player, the game has granted a procedurally generated dungeon. In the co-op mode, multiple colonists with limited health and restricted resources will engage with one another. Another fascinating feature of this version is no time limits letting the player focus on management only. While playing the game, the player views the environment from an isometric angle. Kingdom Builders game has primary features that include Deep Exploration, Different Resources, and a Mixture of Combat and Skills. 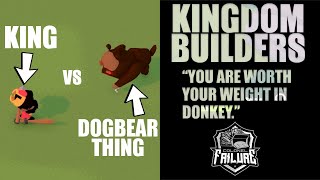 Dragon Quest Builders 2 is a fantastic Building, Crafting, Single-player, and Multiplayer video game takes place in the Sandbox world where the player can create and destroy whatever he wants. The game is available to play on PlayStation 4, and Square Enix develops it. It takes the player in the block-based world where the player is capable of creating and destroying his fate. It acts as the latest title in the series of Dragon Quest Builders and incorporates the Role-playing elements. According to the storyline, the children of Hargon order that the worship destruction and despises building above anything. During the game, the player needs to travel across the world and struggle to keep his friendship with Malroth, a young boy who has lost his memory. The player navigates the world from a third-person perspective, and can run, jump, farm, create and destroy his way through challenging levels. The player can use different tools to create whatever he wants. Dragon Quest Builders 2 includes prominent features such as 3D Environment, Detailed World, several Blocks, Plant Crops, and more.

Flow Free is a Grid-based Puzzle video game by Big Duck Games. The game is specifically designed for mobile platforms and offers playability on iOS and Android devices. The game allows the players to enjoy playing on a Grid filled with squares and colored Dots that occupy some of the Squares on Grid. The main objective of the game is to draw multicolored pipes by moving the colored dots and cover the grid with pipes. The pipes must not intersect of touch each other or else the game ends. Every time a player clears the level, the grid size increases and the game difficulty relies on the size of the grid, the more the grid expands, the more the game gets difficult. Flow Free offers paid update packs in which the players can have more difficult levels, enhanced graphics and mechanics and gameplay, etc. Flow Free offers two expansion packs for the game named as Flow Free: Bridges and Flow Free: Hexes. Both of the Expansion packs can be bought from online game store. With an amazingly challenging and addictive gameplay, beautiful visuals and all the dots connecting fun, Flow Free is a marvelous game to play.

Monument Builders – Alcatraz is an Adventure, Casual, Time Management, City Building, Simulation, and Single-Player game developed by Little World Studio and published by Games for All. In this game, you have to construct a very famous prison in the United States of America and experience the whole journey inefficient manner. Try to listen to the order of your head contractor and make a good relationship with him which may help you in the further promotion.

Arrange all the construction resources before the contractor’s order and try to complete all your construction work within the given time. Arrange your workers and give them lectures about the whole construction plan, discuss each thing with them. Tackle challenges magnificently and faces enemies effectively. Try to Monument Builders – Alcatraz has fundamental features such as Several Skills, Building Materials, Giant Monsters, Genuine Anecdotes, Varied Levels, Simple Controls, and Real-Time Gameplay.

Dragon Quest Builders is a wonderful Action Role-playing, Sandbox and Single-player video game developed and published by Square Enix. The game takes place in the block-based world like Minecraft and offers an exciting gameplay set in Alefgard, the world of Dragon Quest. The story revolves around a protagonist, the survivor, who must rebuild the environment after it was demolished. During the gameplay, the player needs to collect elements similar to Terraria and use them to build different structures and items. It consists of a variety of levels and the player perform his best to complete each level and tasks. He manipulates the world from a third-person perspective, and use multiple blocks to create a structure in style. It offers open-ended world where the player moves freely in any direction to fulfill the requirements. After completing the task, the player will receive points that can be used to unlock further content. The playable character can run jump, interact with objects and environment and can complete tasks to level up. Dragon Quest Builders offers core features such as Unleash your Creativity, Rescue the World, Set out on Building Adventure and more.

Command & Conquer is the first main installment with two playable factions, such as the Global Defense Initiative and the Brotherhood of Nod. Base production and unit training is the main task, and collecting Tiberium, the game’s sole resource, is a must. Command & Conquer: Red Alert is the second main entry with two factions and the objective to win the battles.

Players acquire credits to purchase structures and improve their skills. Command & Conquer: Generals is another included game with the same scenario but different features. Various units have been introduced that range from infantry to aircraft with special abilities. Success depends on making the best possible strategies by combining the units and using their advantages against opponents.

Flow Free: Warps is a Puzzle and Single-player video game developed by Big Duck Games LLC for Android and iOS. The game enables the player to wrap paths across the board where the game is set in the challenging levels. The main job of the player is to connect matching colours by drawing a line with a pipe to create the flow and struggle to pair all colours to cover the entire board to solve tricky puzzles. While playing the game, the player needs to be careful and watch out the pipes don’t cross or overlap to avoid pipe breaking. Free play mode comprises hundreds of challenging levels and the player can compete against the clock in Time Trial mode. New levels will be included on daily basis, and the player plays the game using the touch controls. The game becomes tricky to play as the player completes some beginning levels. Flow Free: Warps includes core features such as Achievements, Smooth Controls, Fun Sound Effects, Highly Quality Puzzles, 2500 Puzzles, and more.

Builders Of Egypt is an Adventure, Management, Economy, City Building, and Single-player video game developed and published by Strategy Labs. The story unfolds the protodynastic time of history, allowing the player to experience the birth of Old Egypt and the death of Cleopatra VII. Being a mayor of the town, the most important aspect is the skillful management and proper distribution of resources amongst all the areas of urban.

The player must plan the grid of streets smartly, place the buildings perfectly, and build a mutual relation efficiently. It is known to everybody that a well-designed city will greatly improve economic terrain and increase the city income, so the player must not ignore this aspect to grow more. The governor’s life will be in full trouble as he has to make difficult choices according to the variation in the political environment. A series of wrong choices can cost the loss of trading, and definitely, the investors will not get interested in investing in the project.

Builders of Egypt: Prologue is a City-Building, Adventure, Economic, and Single-player video game developed by PlayWay S.A. All the events of the game take place in the valley of the Nile, where the player starts with a proto-dynastic period with the purpose of shaping the destinies of people. Being the ultimate supreme governor of the state, the player will face difficult choices in a constantly changing political environment.

All the cities are suffering from severe threats of improper management, and a mixture of different cultures will be a tough task to handle. If the player makes a series of wrong choices, he will definitely lose his trading partners. Moreover, the deficiency of deference to the rulers will end up in a civil war. In this concern, trade is the most dominant element, and the absence of trading will result in great economic permanence. The player must produce goods for export at reasonable prices and must grow relationships with other cities for the welfare of the community.

Alhambra Game is a Board, Strategy, Single-player, and Multiplayer video game developed by Queen Digitals. All through the game, the player has to work for the betterment of Alhambra as the best master builders of Europe and Arabia want to demonstrate their skills. The player has to employ the most suitable team of builders and make sure that he must not run out of the currency.

The game has an interactive tutorial that makes it easy for the player to start without knowing the rules and regulations. The player must gain achievements by building a dynamic Alhambra and attempts to be at the top of the ranking table.