Ducati: 90th Anniversary developed by Milestone is an Adventure, Racing, Single-player, and Multiplayer video game. As the spin-off to the RIDE game from the same developer, it also lets the player control one of the fastest bikes on the tracks with one objective to become the number one in the end. While racing, the player views the environment from the third-person or first-person perspective.

The game has come up with over 30 bike models with different stats of class, engine, suspension, and other attributes. Moreover, Hd realistic graphics and slow-motion effects also increase the passion for racers. Championship mode lets the player compete against many racers through many uncomfortable tracks where only one can dominate the title. In multiplayer mode, the player can challenge his friends for an online competition where a sharp-minded racer can beat all the best ones. Ducati: 90th Anniversary game has core features such as New Bike Models, Third-person Angle, HD Graphics, and Slow-motion Effects. 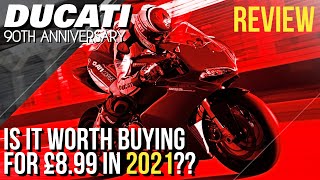 Ducati World: Racing Challenge is a Racing, Single-player, and Multiplayer video game developed by Acclaim. Identical to other racing adventures, the player serves as a bike racer where the goal is to keep the racer all above the line. Different racers participate in the race, but the player with full control of the bike will lead the line.

While racing, the player views the playfield from a third-person and first-person perspective. At the bottom of the screen, a speed meter exists that indicates the player the speed of the bike. The game has two playable modes such as Quick Race and Ducati Life. Quick Race Mode lets a single racer to climb through a series of tracks where an accomplished racer can achieve desirable bikes.

Three difficulty levels and eight initial tracks are available to test the skills. Ducati Life Mode allows the player to begin with a set amount of cash but must earn more cash to buy other bikes. The earned can also be used to purchase different upgrades such as brake kits, bodywork, wheelsets, flywheel, etc.

Ducati Moto is a Racing, Simulation, Single-player, and Multiplayer video game developed by 4J Studios. Throughout the game, the player steps into the shoes of an ultimate racer who has to compete for the top best racer of the world against other racers. The game has introduced almost five events, including Time Attack, Solo Race, Eliminator, Race Line, and Stunt Challenge.

The game takes the player to unique and different places like Morocco, Italy, Hong Kong, and more. Moreover, the game has over eleven Ducati motorcycles with varied attributes of suspension, speed, engine, and brakes. Some of the famous bikes, including Hypermotard, 848 and 1098 Superbikes, and Desmosedici RR, are also there for a thrilling race. Interestingly, the player can play with one of the eight different characters possessing colorful and distinctive leathers. Wheelies, burnouts, and jumps can also be performed, along with speeding up the bike.