Doraemon Story of Seasons is a Simulation, Casual, Farming, and Single-player video game developed by Marvelous Inc. for Windows. Throughout the gameplay, the player assumes the role of a farmer and needs to create farms. The game offers different characters to enjoy the adventure that include Doraemon and his friends.

The game allows the player to have a conversation with the NPCs through a set of pre-defined dialogues. It takes place in the Natura land, where every NPC has a dominant role. Explore the town of Natura and discover different adventures.

The player can utilize the Doraemon gadgets to overcome the hurdles through the game. While inspecting the land, the player views the environment from an isometric angle. The player must use every possible way to protect the farm and keep it alive. Doraemon Story of Seasons game has core features, such as Different Characters, Doraemon Gadgets, Bird’s Eye View, Farming Simulator, and NPC Interaction. 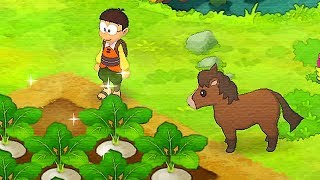 Doraemon 2: Nobita no Toys Land Daibouken is a Platform, Casual, and Single-player video game developed by Epoch. During the gameplay, the player fights with different evil toys who want to rule Japan, and the player needs to rescue the country and inhabitants living there.

The story is about Nobita, who is lazy throughout his every task and always gets tormented by grounded children in the school. His grandson sends a robot named Doraemon to help Nobita in his personal affairs from the future. One day, Nobita, along with his friends, travels to a toy land where some evil toys threaten them.

The game offers two different modes, such as Adventure Mode and Platform Mode. The adventure mode allows Doraemon to walk around the town, talk to different people, and enter houses. At the same time, platform levels include various hurdles, such as pits, spikes, and several enemies trying to stop heroes. The player can select one character from six different roles available in the game, such as Nobita, Doraemon, Shizuka, and a lot more with different abilities.

The player can jump the enemy’s head or use long-ranged weapons to defeat enemies. The game has some core features, such as Six Characters, Long-Ranged Weapons, Several Enemies, Different Hurdles, and Two Modes.

Doraemon 3: Nobita no Machi SOS is an Action-Adventure, Simulation, Exploration, and Single-player video game developed and published by Epoch Co for Nintendo. It is the third main entry in the overall series with the same experiment as the player has gone through the first two attempts. The player will come to take on the role of a lazy boy named Nobita through a series of missions that cannot be completed without the help of the robot.

Like the original TV series, Doraemon is the future robot who has come to help Nobita in this century and will guide him through the toughest situations. The controlling scheme is very nice, such as using the joystick, the player can move the main character, and for carrying out different actions, the player can hit action buttons located at the opposite side of the D-pad. Keep an eye on the limited lives, as the player can only continue if he has hearts in hand.

The Sims 4: Seasons is a Downloadable Content Pack (DLC) for Life Simulation game The Sims 4, developed by EA Maxis and published by Electronic Arts. The game supports Single-player mode only, and the DLC pack comes with seasons and holidays. It borrows the elements from The Sims 2 and The Sims 3: Seasons. In the game, the player will discover new elements such as New Career (Gardening), New Game Interactions (Weather, Holidays, Seasons and Calendar), New Objects and New Death (Thermostat). The game comes with a new calendar icon, letting the player plan his upcoming events for his Sims. The player can use the calendar icon to plan new upcoming events. It includes weather system in the lives of the Sims to tell new and exciting stories, in which the player will enjoy the seasonal activities and enjoy heartfelt holidays. The Sims 4: Seasons includes prominent features such as Impactful Weather, Revel in Seasonal Activities, Enjoy the Holidays, Build a career as a gardener, and more. Check it out, if you want a 2nd life where you can perform whatever you wish without any limitations to fulfil your dreams.

Pure Farming 2018 is a Farming Simulation, Agriculture, Building, and Single-player video game developed by Ice Flames. As a modern farmer, the player has to use the latest tech machines and farming techniques to manage all the aspects required to build charming fields. European, Asian, and American planting fields are there to crop hemp, coffee beans, and olives. All modern farming, such as plantations, greenhouses, field husbandry, and more things, must be managed accordingly.

The game has plenty of the latest tractors and vehicles where the player can unlock all the vehicles for a vivid experience. Complete vehicle customization lets the player upgrade engines, alter color, equip advanced machinery, and replace the parts. Three playable modes are there with unique objectives are there to let the player enhance/polish his farming skills. Pure Farming 2018 game has core features such as Three Modes, Advanced/Improved Vehicles, Various Fields, Varied Locations, and Global Farming.

Moon Farming – Prologu is a 3D, Strategy, Adventure, Simulation, First Person, Crafting, Atmospheric, and Single-Player game developed by SimulaM and published by Play Way S.A. In this game, you have to play as a modern farmer character. Your main task is to find new farming techniques to get more crops. But the main and surprising thing inside this game is that the land in which you have to start farming is a landscape of the Moon.

First, try to find a proper landscape over there, then start preparing the whole barren land for farming and yield several crops. Try to grow new technological-based crops that give you more results and fulfill all the demands. Moon Farming – Prologu has fundamental features such as New Farming Possibilities, a unique Moon Environment, Vertical Farming, Several Crops, Huge Open Worlds, and Newest Experiences.

Return to PoPoLoCrois: A Story of Seasons Fairytale

Return to PoPoLoCrois: A Story of Seasons Fairytale is a Role-playing and Single-player video game developed by Marvelous Inc. and published by Marvelous USA for Nintendo 3DS. The game takes place in the fantasy world corrupted by darkness. The player selects his character and jump into the world to restore the life, battle against evil to save the day and struggle to return to PoPoLoCrois. According to the storyline, all the people of the town have come out to celebrate the thirteenth birthday of Prince Pietro. But there is a special guest among them named as Marmela, from the Kingdom Galariland, whose nation has been his destroyed by shadowy creatures. In the game, the player controls the character and struggle to explore the world and participate in battles against enemies. The game mainly revolves around Role-playing and Farming Simulation and offers an exciting story to explore. Return to PoPoLoCrois: A Story of Seasons Fairytale includes core features such as an Epic Quest, Exploration, Multiple Levels, Save the World, and more. Try it out, and you’ll like it.

Farming Simulator 2011 is an Open World, Farming, Single-player and Multiplayer video game created and published by Giants Software. The game is the brilliant installment in the series of Farming Simulator, and it comes with improved new features, mechanics, modifications, and new content to enjoy. The player steps into the shoes of the protagonist, the modern farmer to experience the challenge of eighteen-hour days maintaining the new farm in the beautiful countryside. The player starts the game by selecting from the small variety of vehicles and farming machinery to navigate the sparse farmland. As the player advances through the story, he accomplishes a series of objectives like feeding and breeding the cows, milking, seeding, and more. The Multiplayer mode of the game enables the player to manage the farm with buddies over the local area network or internet. It has a career mode, in which the player as the young farmer needs to experience the workaday life of the countryside in the adaptable land. Farming Simulator 2011 includes prominent features such as Multiplayer Mode, Career Mode, Huge Vehicles, Machinery, and more. Check it out, if you love playing farming games.

Farming Simulator 2013 is an Open World, Management, Sandbox, and Multiplayer Farming Simulation developed and published by Giant Software for Multiple Platforms. The game invites the player into the challenging world to assume the role of the modern farmer. In the game, the player is capable of taking on all the challenges of farming life, including crops, sales, and animal husbandry. Now, it’s up to the player to manage and grow different crops hi his farm and explore the environment surrounding him. The player’s career advances, he will control over the tons of farming machines, tools, and vehicles to achieve the tasks. The game comes with an online mode and other services. The player can manage a farm at the start of the game with up to ten other players in on either online or local network. During the game, the player can share his vehicles, farming tools as well as equipment with his friends from around the world. Farming Simulator 2013 offers prominent features such as Breed the Castle, Two different Environments, over 100 Vehicles, Manage the Farm, and more. Try it out, and you’ll like it.

Story of Seasons: Pioneers of Olive Town is a 3D, Casual RPG, Anime, Farming, and single-Player game developed by Marvelous Inc. and published by XSEED Games. In this game, you have to manage all the farm duties and take care of your farmland which is raised by your forefathers. Now you must fulfill their task and harvest crops, manage fields, and maintain the whole farmland according to your choice. Clear the landscape and gather all tools or machinery for construction, and build a new infrastructure for your town.

There is a range of new accessories and facilities, and you just have to repair the old ones and place new ones according to your people’s needs. Harvest as many crops as you can to fulfill the condition of your farmland people. Raise cows in such a way that they start milking, and it may help you in creating your business. Story of Seasons: Pioneers of Olive Town has prominent features such as Endless Possibilities, New Adventures, Several farmlands, Fantastical Volcanos, New Outfits and Accessories.