DELTARUNE is an Action-Adventure, RPG, Single-player, and Multiplayer video game developed and published by Toby Fox

DELTARUNE is an Action-Adventure, RPG, Single-player, and Multiplayer video game developed and published by Toby Fox. During the main theme, the player controls a young protagonist named Kris, who is tasked to save the world with the help of Susie and Ralsei. All the characters will need to work as a team, and during their quest to encounter the dark fountains, they confront a group of inhabitants residing in the official Dark World and must stop them.

The combat system is based on bullet attacks that a player has to overcome in order to survive, but enemy encounters can be resolved peacefully as well. When a party member’s HP reaches zero, they become downed and will not be able to fight until revived. The HP of downed party members can be regenerated slowly but only if the player’s member has collected a healing source scattered all over. 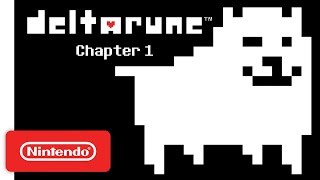 Toby: The Secret Mine

Toby: The Secret Mine is a Challenging 2D Action-Adventure and Puzzle-Platform video game. This super cool game is highly inspired by Limbo and Nihilumbra and offers an amazingly addictive and quite challenging game-play. According to the story-line, the game takes you to a setting of a small village that once was so peaceful, but the invasion of unknown entities made the village a place of tragedy. Most of the populace was abducted and those who were gone in search of the abductees, never returned either. Following all of the situation closely, little Toby stands up and plans on a journey to go rescue all the vanished and end the enemy incursion for good. You are required to help Toby go through an eerie and quite challenging environment, help him solve some interesting puzzles, avoiding the enemies and surviving in an environment filled with enemies and deadly traps. While on your adventure with Toby, enjoy beautiful hand-crafted visuals, amazingly challenging puzzles, deadly traps and various types of enemies, an immersive game-play and loads of hours of plain entertainment.

Super Toby Adventure is an Action-Adventure, Side-Scrolling, Platform, and Single-player video game developed by Tip Top. The story is told from the perspective of Toby, the main hero, who woke up early in the morning and found that his parents were missed. Upon investigation, he came to know that a monster had kidnapped his loved ones, and it was time to show love to them.

The player armed with skills and abilities is embarked on the road to rescue his parents, where encountering the enemies will be the ultimate objective. As the player can jump on the high platforms and kill the monsters with the baseball bat, it is easy to go through plenty of initial levels. But when he approaches the center, waves of enemies will appear from both ends so that time will be the tough generally.

Star Fox Zero is an amazing, Single and Multiplayer Scrolling Shooter video game developed and published by Nintendo. It is the sixth entry in the series of Star Fox video game and the remake of Star Fox 64. The game takes place in the procedurally generated world and lets the player control Fox McCloud. There are a variety of levels, and the player has to pilot his Arwing Craft throughout a set of missions and struggle to take down enemies and earn points. The plane is loaded with dozens of weapons like a gun, missiles, rocket, and more. The game rewards the player with points as progress through the game and can use these points to upgrade his craft and weapons. Other planes, levels, and upgrades will be unlocked as the player collects enough points or become advanced. The game features multiple vehicles and lets the player participate in both land and air combat to wipe out enemies. Star Fox Zero offers prominent features such as Unique Power-ups, Upgrades, a variety of (Crafts and Vehicles), 3D Environment, Advanced Enemies, and more. Try it out.

Ultimate Fox Simulator is an Adventure, Third-person Exploration, and Single-player Simulation developed and published by Gluten Free Games LLC. The game enables the player to dash into the brand new adventure in the form of a wild fox. For the first time, the player has the ability to select one of three playable foxes and then embark on a journey to hunt down food in the jungle, raise his packs, and raid the farms of the villages for berries and yummy livestock like sheep, goat, and pigs. The game offers realistic simulation, letting the player experience the hard life of a fox. There are many dangerous bosses available, and the player can test his skills against five challenging boss battles. Each fox has its unique attributes, and the game starts with the player choosing his favorite fox and setting out on a journey to raise the family, and more. In the game, the legendary animal awaits the player at the edge of the jungle and will push the skills to the limits. In the start, the player has to create his pack, raise his cubs, and also modify the characters to have fun.

Little Fox Animal Doctor blends Role-playing and Educational game elements, developed and published by Fox and Sheep for mobile devices. The game puts the player in the role of a doctor whose office is in a treehouse in a jungle. Like the doctor, the player should take care of animals to heal and play mini-games to make points. Up to seven small animals are waiting for the player to take care of them. The story starts with a little fox who has caught a cold and looking for the player to cure him. There are several diseases available that the player needs to heal to advance through the storyline. Fox, Mole, Bat, etc. are prominent animals and with up to twenty-one injuries, diseases, and sicknesses. In the game, the player has many treatments and medicines to select from to cure the animals and make them happy to unlock additional content. Little Fox Animal Doctor offers prominent features such as Seven Animals, Cure for Diseases and Injuries, Cute Characters, and more.

Star Fox is a Rail Shooter, and Single-player video game developed and published by Nintendo in 1993. It is the first title in the series of Star Fox and centers on the protagonist named as Fox McCloud, protecting his homeland called Corneria against the attack of Andross’ forces. The game takes place in the 3D environment and puts you assume the role of the protagonist. Your primary objective is to explore the world from a third-person perspective, pilot a spacecraft, and pits against various foes including robots, strange creatures, and spaceships, etc. There are a variety of levels, and each level requires a completion of certain objectives to progress. During exploration, you can pick up various power-ups to enhance your abilities to face off hordes of enemies simultaneously. In each level, you can accompany by three different AI wingmen such as Falco Lombardi, Slippy Toad, and Peppy Hare. Control your spacecraft loaded with multiple weapons, and battle against rivals for your homeland. Star Fox offers brilliant features, superb gameplay, and excellent graphics. Star Fox is the best game to play and enjoy.

Freestyle 2: Silver Fox Pro Pack is a Downloadable Content Pack for the original game, revolving around Sports, Basketball, and Online Multiplayer video game developed by Joycity. The mainly revolves around Sports gameplay where the player set up his character, customize it using lots of options and play against other players for the experience points. The DLC pack comes with essential items such as Silver Fox Lv. 1, Silver Fox Card Deck, Silver Fox SP Uniform, and more. Before starting the game, the player create his character in his style selecting the several combination to represent himself in-game. The main objective of the player is to explore the environment from a third-person perspective, struggle to snatch the ball from other players by following the rules and defeat the rivals using his unique skills. Freestyle 2: Silver Fox Pro Pack includes prominent features such as Essential Items, Detailed Graphics, Superb Gameplay, and Smooth Controls. Check it out, and have fun.