Bilkins’ Folly is an Adventure, Exploration, Open-World, and Single-player video game developed and published by Armor Games Studios for Windows

Bilkins’ Folly is an Adventure, Exploration, Open-World, and Single-player video game developed and published by Armor Games Studios for Windows. During the gameplay, the player will serve his services as a treasure hunter who sets out on a mission to find his missing mother and grandfather. Unfortunately, both of the characters disappeared many years ago, but there is a huge problem that the player’s ship got wrecked in a storm, and he needs to find a new way forward.

Meanwhile, the player is not alone, but the family’s beloved dog Drayton will help him to repair the ship, reunite the crew, and discover secrets that will change the scenarios. Interestingly, the player can also customize his map to solve puzzles and unlock other secrets but doing so will cause troubles because some puzzles are extremely harder and require the player to be focused. 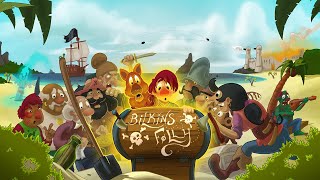 Earth Defense Force: Insect Armageddon is an Action, Co-op, Adventure, Shooting, Single-player, and Multiplayer video game offered by Vicious Cycle Software, Inc. During the gameplay, you take the role of a soldier of the Earth Defense Force and need to serve the planet fighting with insects and robots. While inspecting the world, you can shoot enemies in a third-person view.

The game takes place in the city of New Detroit, where bio-engineered insects attack and spreads harmful viruses in the city to destroy humanity. The game offers three different chapters, and each of the chapters further divides into five missions. There are 300 different weapons that you can utilize to ruin waves of insects and robots.

This game offers four different classes, such as Trooper Armor, Jet Armor, Tactical Armor, and Battle Armor. In the trooper armor, you can get access to more weapons and is also available in survival mode, and jet armor allows you to acquire a jet suit and fights in the skies and offers energy-based weapons, in the battle armor, the game changes the character in a walking tank that equips more powerful abilities and a portable shield, while tactical mode is a class that allows you to dispose turrets, mines, and radar dishes.

You can play a six-player survival mode in which you make a team of six players and face numerous enemies in the playfield. Earth Defense Force: Insect Armageddon contains some significant features, such as 300 Weapons, Three Chapters, Several Missions, Four Classes, Open-world, and Third-person Perspective.

Mega Man X5 is a Platform, Action-Adventure, and Single-player video game developed and published by Capcom. It is the sequel to the Mega Man X4, where the player takes on the role of the main series protagonist, whose main target is to battle against enemies through eight linear stages. Similar to previous games, the player can attain a special weapon after defeating each stage’s boss. Ultimately, the player has been given the chance of switching between both the shooter and the swordsman as per requirement.

As if X is chosen as a prime character at the start, Zero cannot fire his Z-Buster, and if Zero is chosen as the main character, then X loses his armor. Fourth Armor, Falcon Armor, Gaia Armor, and Ultimate Armor are the four types of armors that have been added new. The overall performance during stages will be categorized based on major factors such as completion time, damage inhaled, and enemies demolished.

Shogo: Mobile Armor Division is an Action-Adventure, First-person Shooter, and Exploration video game published and developed by Monolith Productions. The game brings both Single-player and Multiplayer modes and takes place in the fictional world full of enemy forces who invade the environment. It enables the player to pilot a massive mech to battle enemies or explore the environment on foot from the first-person perspective to perform missions. The player acts as the protagonist named as Sanjuro Makabe, who is a pilot in a Mobile Combat Armor and serves as the commander of the United Corporate Authority army. The primary objective of the player is to navigate the world to find out the rebel leader named as Gabriel. The game comprises different missions, and each mission has a set of objectives that the player has to accomplish to score the points and progress. During the gameplay, the player uses a huge arsenal of weaponry and can upgrade them using his earned points to enhance their performance. Shogo: Mobile Armor Division is the superb gameplay for those, who love playing First-person Shooter games.

Steel Battalion: Heavy Armor by From Software is a cool Action, Shooter, Vehicular and Mech Combat video game. The game is set in the year 2082 where a Silicone Eating Microbe eats up every processor in every computer and the entire world is left without computers. To eliminate the threat, US Govt. launches a mission with the help of two legged Battle Mechs and this is where you get into the play. Your duty is to get into a Mech and go on a mission to destroy the bridge that connects the New York City to other parts of the world. After conquering the New York you must defend the city and defeat the threats in order to save the populace. Steel Battalion: Heavy Armor provides with a kind of different story but similar gameplay and mechanics and allows you to enjoy an amazing Mech-based Action and shooting game-play. With a great story, mechanics, wonderful visuals and an immersive game-play, Steel Battalion: Heavy Armor is a brilliant game to play and enjoy.

FreeFall Tournament is a Third-person Shooter, Space-themed and Single-player video game developed and published by Free Range Games, LLC. The game takes place in the space environment and puts you in the experience of fast-paced gameplay. Your ultimate task is to select your one of many characters and start your adventure. Your character equips with armor, hammer, guns, armor, jetpack and more. Take part in aerial combat and use melee weapons and attacks to take down enemies and score the points. There are a series of levels and each level full of different challenges, NPCs, and enemies who are waiting for you. Navigate the world from the third-person shooter, use different weapons and complete your objectives to progress through the game. Take part in different fast-paced matches and conquer all to become the master by showing off your shooting abilities. You can use your points to upgrade your weapons, character armor, etc. It offers an open environment where the game takes place and places different power-ups in various locations around the world. With brilliant mechanics, addictive gameplay, and impressive graphics, FreeFall Tournament is the best game to play and enjoy.