Rite of Passage: Heart of the Storm

Rite of Passage: Heart of the Storm is an Adventure, Puzzle, and Single-player video game developed and published by Big Fish Games for Android

Rite of Passage: Heart of the Storm Games Description

Rite of Passage: Heart of the Storm is an Adventure, Puzzle, and Single-player video game developed and published by Big Fish Games for Android. It takes the player on an adventure where he finds a vengeful spirit, just awakened from an ancient temple. The player is going to help his friend, Professor Mann, but his plane suddenly crashes.

It is up to the player’s efforts to find his friend and help him to get rid of this strange phenomenon before something worse happens. The questions are many, but the answer lies in the feasible solutions of the puzzles. It might be possible that some weather experimentation went wrong, or Professor Mann was going to reveal a secret that’s been kept hidden.

The scenario is to dodge the dangerous tempest through hidden object scenes and solve the troubling puzzles. The game has core features such as Hidden Object Scenes, Troubling Puzzles, Strange Creatures, and Simple Scenarios. 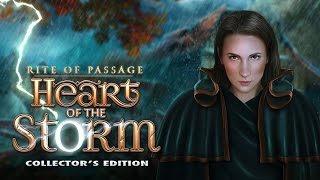 6 Games Similar To Rite of Passage: Heart of the Storm Adventure

Rite of Passage: Hide and Seek

Rite of Passage: Hide and Seek is another brilliant Adventure-based hidden Object Puzzle video game similar to Gardenscapes. The game tells the story of mysterious fog and the vanishing of 20 children including your brother that compelled your father to go look for your brother and other children but he never returned too. After finding out the truth about your father being alive and never returning back all this time, you are to embark on a journey to the Greystone to find out about the truth. Head out to the openness of the mysterious world around you, solve some challenging puzzles, and find the necessary objects to finally solve the mystery of disappearance of your father and all the missing children. Rite of Passage: Hide and Seek offers beautiful visuals, challenging puzzles and game-play and a wonderful story to follow.

Fish Tycoon lets the players be Fish Store owners who is responsible of Breeding and Caring for hundreds of different fish species. Developed by Last Day of Work, Fish Tycoon is a marvelous Single-player Business and Management Simulation. According to the gameplay, Fish Tycoon tasks the players to Care, Pet, Breed and Sell exotic fish types and run a store while serving the customers and keeping the Store economically viable to complete the goals of the game. Players can have various types of fish in the store such as Greenfin Spotanus Fish, Speckled Leaf Fish, Crimson Comet Fish, Orange Snooper Fish, Wasp Grouper Fish, and more. The ultimate goal is to relocate to the Mysterious Island named as Isola, and repopulate the surrounding waters with the extinct species of fish that once swam across the seas. All the fish suddenly disappeared and now the players are tasked to breed and cross breed various fish to have the Magic Fish, the ultimate source of all the Fish in the seas of Isola. The secondary objectives of the game include solving various types of Genetic Puzzles, restoring the fish population to a certain level and make the island the habitat of the most magnificent fish ever.

Spider: Rite of the Shrouded Moon

Spider: Rite of the Shrouded Moon is a Puzzle-based and Single-player video game developed by Tiger Style for multiple platforms. The game acts as a sequel to Spider: The Secret of Bryce Manor and offers improved gameplay and comes with new features. During the gameplay, the guides the spider with a goal to survive by eating insects and spinning webs. At the same time, the player can navigate the environment of manor, find secrets and clues to solve the brain-minding puzzles. The specific task of each level is to eat the certain amount of insects to earn points. A portal will open to the next level, as the player completes the task of the level. There are moths, ladybugs, and wasps are also available to eat. The game takes place in the location known as Blackbird Estate. The player can explore the environment from a side-scroll perspective, where he can take aim to shot web and make a path to reach the certain place to advance through the game. With addictive gameplay, superb mechanics, and brilliant soundtracks, Spider: Rite of the Shrouded Moon is the wonderful game to play and enjoy.

Open Heart Surgery Simulator developed and published by Happy Baby Games is a Single-player Surgical Simulation for Android platform. The game puts you in the role of the heart doctor and takes place in the fictional hospital. It revolves around a superb doctor including real surgery tools and crazy treatments and so much fun. In the game City, the citizens from a different professional are suffering from different heart diseases. They need a good doctor who can give them a treatment to get well. You can get your white coat on and dive into the world where you have to examine different patients in your fictional clinic, do their test, and take them in Operation Theater if the condition of the patient is serious. Select the specific tools and equipment to perform the various operation and surgery like heart transplant and heart surgery. Run your fictional hospital, save lives of patients and enhance your abilities. Engage yourself in real surgery experience and become the doctor around the world. Open Heart Surgery Simulator includes core features such as Open Heart Surgery, Check Temperature, amazing Graphics, Fun Treatment, and more. Open Heart Surgery Simulator is the best game as compared to other Surgical Simulation to play and enjoy.

Heroes of the Storm Free

Heroes of the Storm by Blizzard takes the already pacing MOBA genre to further heights as it offers diversity and plenty of room in gameplay. The game is now out of its Beta mode and offers a truly remarkable lineup of both characters and skill sets. Heroes of the Storm is often described as a fantastic brawler because of its 5v5 (PvP) matches and characters from the Starcraft, Diablo and Warcraft universes and allows you to select any one of the classes such as Warriors, Specialists, and Assassins, etc. Heroes of the Storm offers seven main maps and a unique three-lane layout, loads of different game objectives and different settings as well. All this innovation in the gameplay refers to a new type of MOBA experience. Heroes of the Storm mainly focuses on objective-based gameplay and tasks you to simply follow any path or lane towards your goal of destroying your enemy’s base. There are secondary objectives in the game that you can complete while going to achieve the primary goals. Heroes of the Storm lacks the individual type gameplay and instead it highlights a team-based scenario that helps maintain the characters because of their equality in strengths and the part that they play in the game. After every three levels, the game rewards you with trait points that you can use to unlock unique skills, characters, and upgrades. With a truly remarkable gameplay, brilliant mechanics, and impressive visuals, Heroes of the Storm is an excellent MOBA video game to play and enjoy.

Fish Tycoon 2: Virtual Aquarium is a Single-player Simulation developed and published by Last Day of Work. It takes place in the stunning sea environment, where the player has the aim of becoming the fish tycoon. In the game, the player can discover and explore the lost magic fish of Isola as he needs to breed, feed, and sell the fish his way from small-time merchant to an ultimate entrepreneur. In the start, the player needs to dive into the game to embark on an epic adventure of the real-time virtual aquarium with more than four-hundred unique and distinctive fish to find. Similar to the real world, it will be changing and growing along with the pet fish the player gather and care for to advance through the game. While collecting fish, the player can also unlock a variety of useful upgrades and power-ups to boost his power. Renovate the storefront and uncover the special surprises to expand the empire of fish. Fish Tycoon 2: Virtual Aquarium includes core features such as Research Advertising, Gorgeous Items, Magical Plants, Special Surprises, Unique Species, and more.