Dota Underlords is a Strategy, Casual, Single-player, and Multiplayer video game developed by Valve. Throughout the gameplay, the player places characters called heroes on the battlefield. After placing the characters, the player does not need to perform any action more, and heroes battle automatically.

Each match offers eight online players in a turn-based battle against one-on-one format where the player who eliminates all the opposing players will be declared as the winner. In solo mode, the player confronts before AI bots where the bots are stronger. The game also features a practice mode for the beginners where the player can do the practice.

As the player makes progress and gains victories, he earns gold and experience points that enhance the player’s performance. The game also offers duos mode where two players on the separate boards serve as a team and share resources and health. The core features of the game are Duos Mode, Virtual Currency, and Practice Mode. 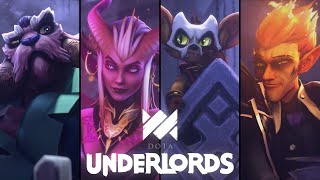 Dota 2 is a Free-to-Play Multiplayer Online Battle Arena MOBA video game by Valve Corporation. This Action-packed sequel to Dota lets you engage yourselves into epic team-based combat matches and allows you to be part of a 5 member team, fight against another team, defeat them and save your Ancients. The one who defeats the other and destroys the Ancients, wins the game. With marvelous Hero characters, a lot of collectibles, cool weapons, skills and abilities, wonderful visuals and an immersive game-play, Dota 2 is a fun MOBA game to play. With a huge online community, regular updates and DLC, superb visual details, immersive game-play and great MOBA aesthetics, Dota 2 is one amazing MOBA game to play. Dota 2 offers a fantastic Shards of War and League of Legends type gameplay and allows you to have a similar gaming experience. Dota 2 offers user created plus the game updates regularly and encourages you to take part in international Dota 2 leagues in order to win amazing prizes and stuff.